What Is the CSIA?

For chimney professionals, the Chimney Safety Institute of America (CSIA) is a well-known organization; however, the general public is not quite as familiar with what exactly the CSIA is. Our staff here at All American Chimney Service is often asked by our customers about this organization. Our customers see that our CSIA-certified chimney sweeps wear the organization’s patches on their uniforms and notice that we often cite the CSIA in our articles on this blog, but they do not really understand the significance of the CSIA. We would like to tell you more about this organization and explain why its certification is so important in the chimney industry.

What is the CSIA?

Established in 1983 as a non-profit educational group, theCSIAhas two main purposes: promoting fireplace and chimney safety awareness to the general public and training and certifying chimney professionals. Its headquarters is located outside of Indianapolis, in Plainfield, Indiana, at the CSIA Technology Center, which is known as the top educational training facility in the chimney industry.

How does the CSIA promote safety awareness to the public?

The organization began this promotion by publishing brochures on topics that include safety tips when operating a fireplace and chimney. The spokesperson for the CSIA is often cited in newspaper and magazine articles and also appears on television news programs to speak about chimney safety awareness. The CSIA is now very active on social media sites, including Facebook, Twitter, and YouTube.

How do chimney professionals receive certification from the CSIA?

The CSIA certification process begins with review courses that focus on three texts: the 2011 edition of Successful Chimney Sweeping, the 2013 edition of the National Fire Protection Association (NFPA) 211 Standard, and the 2006 edition of the International Residential Code. The review courses are offered at the CSIA Technology Center as well as other locations throughout the country and even online. After the review has been completed, the chimney professional must pass two exams based on the three texts, pay the yearly dues, and sign the CSIA Code of Ethics.

Why is the CSIA certification so important?

This credential lets customers know that the chimney professional has been extensively trained in the proper maintenance, repair, and installation of chimneys, fireplaces, and other solid fuel-burning heating appliances. You can trust a CSIA-certified chimney sweep to follow the organization’s Code of Ethics, which include rendering honest and fair services, complying with all applicable building and safety codes, and behaving in a respectable and professional manner on the job.

Want to know more about the CSIA? Contactus atAll American Chimney Service, LLCto learn what this organization means to us and our customers. 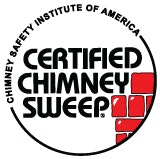